Youtube comes to our rescue at times when we are bored out of our lives .youtube is a very important source of ‘How’, ‘What’, When’, and ‘Where’

The platform has grown in overall popularity in recent years. Pew’s report indicates that roughly 2 in 3 adults which is about 68% use youtube as of Q2, up from fewer than half (about 48%) at the beginning of 2016. 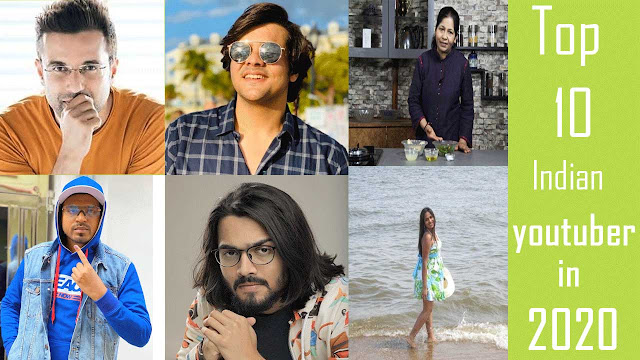 Youtube users clearly value their ability to provide educational videos. we can learn several new things from the platform.
Youtube is a video search engine .you can watch and download videos and audio. you can also like , dislike subscribe  and comment on videos . you can learn any kinds of skills that you want . you can also watch business and career movies.you can upload your own videos and even can earn money from your videos on youtube for more views you get .there are various people earning .

Known for creating content that relates to the everyday life of a youth with comedy sketches.
He has over  19.1 million subscribers. He comes in the list of Top 10 YouTuber in India in 2020. He comes up with quirky videos about the situation that any lower / middle-class person would relate with.
He is a law graduate and started the channel without telling his parents, he only revealed it to fame two years ago not only does he script his own videos, but also directs and edits them by himself.
He was awarded the Best YouTuber Award at the Dada saheb Phalke cutoznitional film festival in Mumbai.
Channel – Amit Bhadana
Subscribes     19.1 MILLION (25 April 2020)

A  youtube star is known for his channel “BB KI VINES” Bam is the first Indian YouTuber to reach 16.9 million subscribers with over 2.37 billion views. He comes under the Top 10 Indian YouTuber in 2020.
He  started his career as a singer in a bar of New Delhi.
He has also won an awards for the ‘Most popular youtube channel ‘ He also won ‘Global entertainer of the year ‘ in 2019.
He attracts criticism because of his content but that is nothing as compared to his sea of supporters. He shows that a great entertainer is not born because of dialogues. entertaining people is a great script, quit wit, sense of humor and acting. He earns a huge amount from his videos.
Channels         BB Ki Vines
Years active     2015–present
Genre               Comedymusic
Subscribers      16.9 million(1 April 2020)
Total views      2.37 billion(1 April 2020)

Needless to say, this guy has to be on this list. He shot to fame with his comic vines on Facebook, Instagram, and youtube.
His comic timing, relatable content, and parodies have attracted  15.3 million subscribers and 1.5 billion views with He comes in the list of Top 10 most subscribed YouTube channel in India in 2020.
Initially, he used to do movie reviews but eventually moved to comic vines from an engineering student, he becomes India’s top watched YouTuber.
What makes him different is that no two videos from his channel are the same, which means that he consistently creates content original and unique content. the spontaneity of his videos is such that it seems someone shot them at his house without informing him.
His videos range from the daily struggles to studies to girl’s issues.

‘Sandeep Maheshwari’ a well-known name in every top Indian youtube list.
He is a motivational speaker and an entrepreneur, who started his career as a photographer in 2000.
He sold his camera and joined a marketing firm. what makes him more authentic as a motivational speaker is a fact that he has seen many ups and downs in his life himself.
As of now, he proudly has 14.9  million subscribers on youtube with over 828,552 views. He comes under in Top 10 Indian youtube channel in 2020.
He often conducts seminar across the country which is attended by the thousands of people  and the best part of the seminar is that all free of cost, His seminar on youtube or otherwise have helped many crestfallen youths.
Joined      13 Feb 2012
Channel   Sandeep Maheshwari
subscribers   14.9 million
Total     829,828,552 views

He is also known as the Technical Guruji cross to 15 million YouTube subscribers. He comes in the list of Top 10 YouTuber in India in 2020.  it is the largest tech YouTube channel in India, while Chaudhary, who writes, creates, edits, and uploads the videos is the second-most subscribed tech-YouTuber in the world. He also has a personal vlogging channel that, with 3 million subscribers, is India’s largest vlog.
His channel talks about the latest mobile phones and technology.he often does unbox and reviews videos for new mobile phones.
Even though the genre pf his channels uncommon, the x-factor of these videos is that they are in Hindi, and are very easy to understand.
Years active         2015–present
Subscribers 15.7 million (Technical Guruji)
Total views 1.69 billion (Technical Guruji)
vikash

Ajay Nagar has a youtube channel called carryminati with 10.4 million subscribers. He comes in the list of Top 10 most subscribed YouTube channel in India in 2020.
An avid gamer, Nagar posted his first video when he was 10 years old and hasn’t looked back since back then.
The content he produces consists mainly of “dissing” the cringe-worthy user-generated content that is spreading on all major social media platforms.
His popularity is such that he ended up interviewing Tom Cruise and Henry cavil.
His videos are in Hindi and he refuses to shift his content from Hindi to English to make it Global because he feels that one can succeed only when one is connected to their roots.

There is no need of exploring this name for music lovers.
You probably know Vidya Iyer (Vidya Vox ) as quite the celebrity on YouTube.she is known for mashing up Bollywood as well as Tamil, Malayalam and Telugu songs with Western pop songs to create her signature style
Vidya Iyer was born in Chennai, Tamil Nadu, India, and was upraise in Virginia in the United States. learned Carnatic music from the age of 5, and also enjoyed listening to English music. She was inspired by her grandmother to pursue Indian classical music.
She became confident of her Indian roots in college, joined the Indian Student Association, and joined Indian folk dance teams
She first started performing on YouTube with her sister Vandana on Shankar Tucker’s YouTube channel.
In April 2015 , She released her first mashup cover on her YouTube page ‘VidyaVox’  .

She is a well- known name among Indian cooking and food enthusiasts.
With 8.86 Million subscribes, She is one of the most popular youtube stars in India and not only that, but she also has various food columns on different websites and is a restaurant consultant.
In 2016, Lok Sabha TV did an episode with her called “shoonya se Shikhar Tak” which reached 1.65 billion views on youtube. He comes in the list of Top 10 most subscribed YouTube channel in India in 2020.
She has refused several promotions offers and likes to keep her channel exclusive for her audience.
Her passion for cooking has taken her a long way and her ever featured in youtube top chef’s coffee table book.

With 6.97  million subscribers Shruti started her youtube channel part-time. but today owns a company Shruti Makeup and Beauty PVT  Ltd.
She started her channel with hairstyling videos, and soon become an inspiration to young audiences.
She is the first YouTuber whose family is involved in what she dose. her husband  Arjun helps her to choose which brands she should collaborate with, while her niece also Loves shooting videos. her sister-in-law is a good look, so they have made videos around that as well.
She creates content based on fashion, LifeStyle, Beauty, makeup, and also product reviews. Recently, she has also come up with a sketch comedy.

Popularly called voh chef, Sanjay Thumma was living in the USA with his family where he decided to seal his restaurants in 2008 and restart his life.
Following this, many of his friends and family members called him and requested him for recipes. this is when he decided to make a video and put it up on youtube.
Soon, his videos become sensational and received huge positive feedback from his audience which now consisted of people from all over the globe.
After this, he moved back to Hyderabad with his family and started his own website called vahrehvah.
In 2019, he reached 1.9  million subscribers and 400 million views. He comes in the list of Top 10 most subscribed YouTube channel in India with their earning in 2020.

I hope you can enjoy the article, for more articles like this you can subscribe to the site by E-mail.